Here it seems that the lady in question would like to send the moon as a combination of courier and US Marine and not only tell him about her sad condition but also bring him back. Tall order I would say!
But when I listen to Ameerabai Karnataki’s soulful rendition, the only excuse I can allow for the moon not doing her bidding is, that he wants to continue to listen to her.

This is from the time before emails and facebook and even before the land line telephone. When one doesn’t have any contact with your lover and no carrier pigeons, the moon is the lone messenger, who can carry your message. Kamini Kaushal before she graduated to Maa roles lip-syncing to Lata’s flawless rendition. Is it only me or does the prelude reminds you also of the prelude to ‘aayega aanewala’. 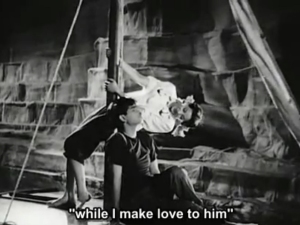 Well, nobody, well nearly nobody, likes to have a voyeur, when you are together with your beloved. Here it is no different with Nargis, she doesn’t even want the moon to be there when she is making love.
Raj Kapoor and Nargis, the romantic couple of the early 50s, seen here at the height of their relationship. The chemistry between the pair is so palpable, that one can’t but feel like a voyeur and look away like the moon is being asked to.

Dev and Mala don’t seem to want the night to end so soon and are begging the moon to take it easy this night. They are knocking on the wrong door I would say, after all the morning doesn’t come when the moon sets, but when the sun rises. Ha! But I remain completely mystified as to their programme for the extended night. The way they are scurrying around like rabbits, maybe they just want to play ‘pakda-pakdi’ (play tag).

We have again somebody, who is trying to hold off the night by asking the moon to travel slowly. This time she would like to fulfil her childhood dreams! That must be some dreams!
Aarti Mukherjee singing under Anil Biswas’ direction! What a song and why is it not so well-known? The film Angulimaal seems to have more such gems. Sad, that it is not more popular.

Lata is again on a moon mission. Beautiful Sadhana, after arriving at the meeting place realises that her paramour is missing with only the moon present. She sends the moon on a search mission. I am just wondering if Kishore Kumar is really moon-faced as Sadhana implies in the song.

Jayshree Gadkar feels that the moon is jeering at her and making fun of her. She feels very miserable as it is, since Ashok Kumar isn’t there. It is quite a refreshing change from her most Tamasha-Songs for which she became famous in the Marathi Cinema.
A gem of a song from the music director Dilip Dholakia, from whom I know only this movie. His son, Rajat Dholakia, followed him in his footsteps.

For a change these are not fresh young lovers, pining for each other. They are celebrating their second suhaag-raat. Meena Kumari is trying to hold off time, because Raaj Kumar is to undergo a surgery the next day at the hands of her ex-lover. Very melodramatic, but is effective all the same!
When this song used to come on Chayya Geet on Bombay DD, I always used to think that she is singing this song, because he has to leave for the war next day.

We have again moonlight-shy lovers. No, she doesn’t want the moon to hide itself for obvious reasons but to be able to say (!) something.
Nutan and Shammi Kapoor come together again after 7 years interval in this film, their last film being Basant in 1960 and the one before that, again 7 years back in Laila Majnu in 1953.
Having had heard Asha in this song, I had always thought that this is O. P. Nayyar’s composition, though the sound is surely S-J-like. Wonder why they didn’t take Lata or Sharda?

Well, if in the 40s, 50s and 60s the moon was asked to turn away or go on some errands, in the 90s he is being asked to alight from the heavens to the earth and that also for a chat!
As they say, the times, they are changing!
A. R. Rahman’s won the silver lotus with the score for this movie and deservingly so!

So which are your favourite moon songs? They don’t have to fit my criteria, they were just there to help me to reduce the list to ten.