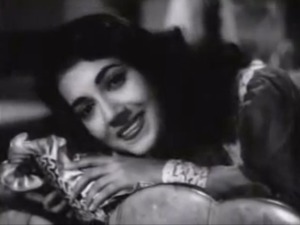 But the songs below don’t sing about the situation described above, but are rather moans of separated lovers or are freshly-fallen-in-love pairs. For this list, I have chosen songs with neend(iyaa) na aaye in the mukhdaa (refrain). I hope you like them as much as I do.

She very well knows why dear sleep won’t come to her. Her beloved is between her eyelids and doesn’t let the sleep enter her eyes. Her baalam must surely give Tom Thumb a run for his money.
Amirbai Karnataki lets one forget all such silly thoughts though! 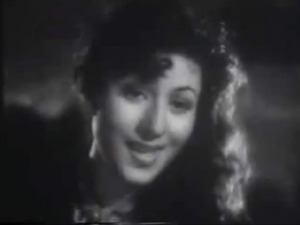 Another song, where I feel like a voyeur. Such an intimacy between these two actors (supposedly lovers at that time) let sone forget that they are acting. Madhubala looks stunningly beautiful here. These eyes, this smile, simply enchanting! No wonder, Dilip can’t sleep!
In contrast to other songs in the list, she is not singing of herself being sleepless, but that her lover’s eyes are dishonest, thus unworthy of sleep. 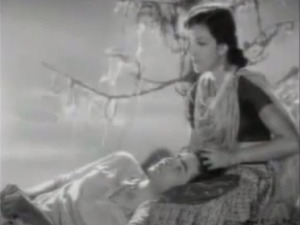 If one has her beloved in between her eyelids and the other in front of her, the lady in question here is pining away in separation from her lover. As often in such cases, she recites the list of her symptoms. These include running eyes (maybe even the nose, but she abstains from mentioning it), burning sensation and lethargy. But she doesn’t need a doctor, she only wants him! Bharat Upadhyay commented at Atul’s blog that this song was not filmed at all or at least didn’t appear in the film. That makes two songs in this list, which didn’t make to the last cut. 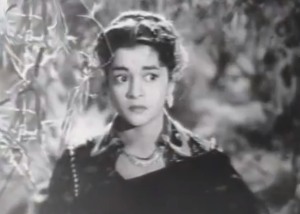 It seems the list of songs to discover songs of Munimji are endless. Did SDB compose for two films? Or did he think so highly of Munimji script that he was sure of a sequel and he thought lage haath he might as well compose for the sequel as well. Bless him and his soul, he surely did it well. This song was not included in the film, maybe not even filmed.
As for the lyrics, the same symptoms as above, but the patient is not earnest about it.

Another sleeples lady, but I don’t think she is missing somebody other than her sleep. This is a clear case of being moonstruck. I just can’t imagine that she would be pining away for Gemini Ganeshan. But there is no accounting for tastes, he married thrice. 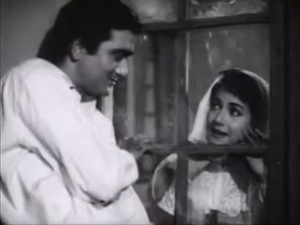 For me this is THE sleepless song! It is sort of a synonym for insomnia. It must be Hemant and Lata’s rendition or K-A’s music.
The lyrics though don’t give much stuff to ooh and aah! The refrain itself wants to make you believe that they are in love with an ogre, thus frightful of him/her. Then in the stanzas it just goes on about “I here” and “you there” “doing something something”. Which reminds me of this.
But all the same ethereal stuff! 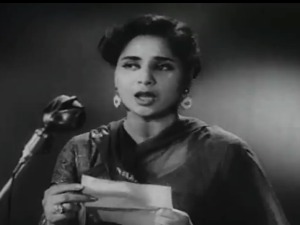 Many people are of the opinion that she is missing her favourite sari, which has made her sleepless. The reason given to support his hypothesis is that otherwise it would mean Pradeep Kumar is the object of her passion. We might not understand such feelings, but as I have said before, there is no accounting for tastes.

As a child, I thought that she is singing of Bahrian quality sleep. I heard this song in the 70s, where there wa the great rush to the Gulf countries, Bahrain (pronounced in my vicinity like barren) being one of them. And anything phoren was very special. So my innocent mind thought that even the sleep experienced on phoren shores must be special. Thank God, this misunderstanding didn’t last long. Otherwise the deep conflict in my heart, which was fired by Gandhiji’s swadeshi movement and this sweet song by Lata, would have torn me apart! 😉 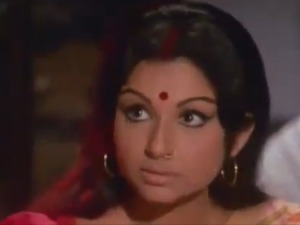 A word-play with shaam (evening) and Shyam (Krishna) describing sleepless nights. This time the symptoms are burning sensation and thirst. Acute insomnia. A chamomile infusion or a sesame oil on the eyelids would help but that would be for people who would be ready to take the remedy. 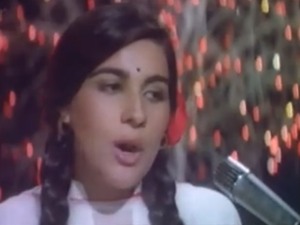 She doesn’t show any such symptoms like seen till now in all the maidens above. She seems to be rather day-dreaming and fantasising of her marriage. Anticipation of times to come can leave one sleepless as well.
Thanks to Prakashji, I know now that there is an extra stanza to this song, which has been cut in the film. Here is the full song.

If this post has not put you to sleep already, maybe you would like to tell me about your favourite insomnia songs. As usual you don’t have to abide by my rules.