In those days there was no seat numbers and seats used to be reserved by keeping a hanky, or a bag or simply a small child. In the Zanana class, sometimes there used to be quarrels in loud voices. In such cases the curtain was hastily drawn, lights put on, and the film stopped, till the quarrelling sides were pacified! This class used to admit children with women ranging from 1 to 8 years. The women and children used to make so much noise many times, that people were avoiding that side of the theatre to sit. These Zanana classes continued 2 to 3 years even after Hyderabad was liberated from Nizam and merged with India.

my father was a criminal lawyer(means, he used to take only criminal cases) and had no time to see films, but my mother was fond of films. Once in every year, in the summer holidays, we used to go to mother’s ‘Mayaka’, a small Tauka place, with only 1 theatre. The rates of these theatres in those day would seem unbelievable today-4 annas, 6 annas, 10 annas and the Dress Circle of 1 rupee. In 1 Rupee we enjoyed cushioned chairs (without hand rests) and Fans. There were only 2 shows, 6 pm and 9 pm. On Friday to Sunday morning shows the rates were half, and old films were shown.

Once I had the opportunity to go to my MAMI’s Mayaka, which was a small village nearby. The attraction was that there was a ‘Touring Talkies (Open Theatre)’ in that town. On the first evening we went to see the film, which was ‘Badi Behan”-1949. It was almost a new film in 1951. I can never forget the experience of Open Theatre with almost 100 people seeing the film in pindrop silence. Later when I went to the Drive-In Theatre in Bombay, I remembered this experience.

From these Anokhe experiences to Anokhe Bol Songs now. . . . Film songs with strange, meaningless words were quite common in films of 50s and 60s. But the First Anokhe Bol song was from HATIM TAI-1933, sung by a chorus. The Anokhe Bol were Donga Donga Dum Dum, Daka Adam Boka, masham maka… This was written by G. R. Sethi with music by Madholal Master.
C. Ramchandra was a composer who was fond of such songs. We find many songs from him. Similarly Kishore Kumar was given such songs as it suited his style and yodelling. By the way, do you know that Yodelling was taught to Kishore Kumar by a small time composer of India-JIMMY or James Singh ?(Thanks to DUSTEDOFF  for this trivia).
It is not surprising that most Anokhe Bol songs were popular, after all some masala with melody is always welcome!
When I started thinking about these songs I found most songs from 50s and 60s. The funniest thing is, it’s not only C. Ramchandra alone, almost every composer (including SDB, Naushad, Salil etc)
and almost all lyricists and all singers were into it. Hai na Anokhi Baat?
The 10 Anokhe Bol songs selected today may not be the Best, but some are iconic, evergreen and some are, maybe , unknown to some of you.
So, enjoy Anokhe Bol. . . . . . . . . . .

This is an Iconic song of Indian Hindi films. In-spite of being as old as about 60 years,it is still very popular. This is shot on Meena Shorey. She looks so young and naughty here.
This song gave her a permanent identity as the Lara Lappa Girl. This tune is based on a Pahadi-Punjabi tune of Kangra District. 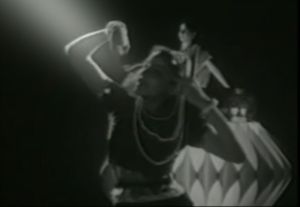 This is a song where live orchestra is playing. The song is shot on Meena Shorey, Majnu, Ajit and others. 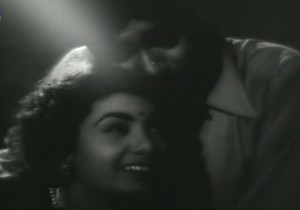 This song is shot on Dev Anand and Nimmi (for once she is smiling and not weeping-as always!).
This was also the debut song for Sandhya Mukherjee. The song is simply fabulous. Just close your eyes and listen to the melody. 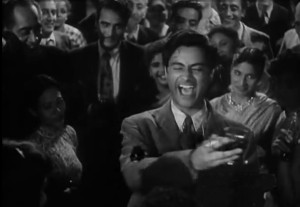 This is one of my favourites from Kishore/Dev Anand duo. The song is shot on Dev Anand,making merry and entertaining the guests. You can also see Mehmood, Sheila Ramani, K.N.Singh and Bhagwan Sinha (doing the Shayar’s role). Just see the range of Kishore’s voice. 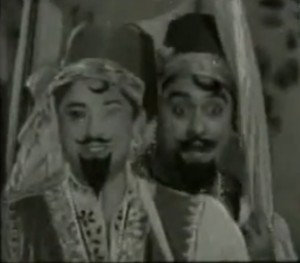 Shot on Kishore Kumar, you can also see Vyjayantimala. It is said that the tune and wording of this song was found by C.Ramchandra, when he heard some children playing and uttering these words. 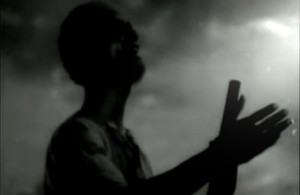 This is a lovely joy song from a land mark film of India by Bimal Roy. It is shot on a group of farmers, who have come to the city to earn, welcoming the first rains of the season.

This is only an audio. The tune is based on a Bengali song of Hemant Kumar, composed by Salilda himself (auto-plagiarism ?)

This is song item done by young girls just before a function. Shot on Meena Shorey. 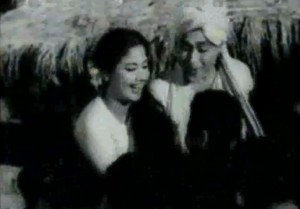 This is a memorable song from a less known composer. Sailesh was a multi faceted person. He has acted as a hero in 2-3 films, he has sung several songs and also given music to few films.