Now we all know that the village life as depicted in our films is nothing like the real thing, but some of the older films did manage to get some sort of realism, simplicity, though in some cases burdensome (Mother India). Whatever the case they always give me a feeling of being purified. Blame it on the pollution inducing contemporary films. Dilip Kumar, Balraj Sahni, even Raj Kumar made convincing villagers. The heroines all looked good enough. Not only that, but the folksy songs were great.
Thank you Harvey for this pleasure in going over some of these wonderful songs. 🙂

So here are 10 beautiful songs depicting village life in all its various moods with fields, fairs, harvest, celebrations, village children, the gaon ka rasiya, and the village belle, hay stacks, sickle, and what have you. Some of Munshi Premchand’s novels/stories were adapted to films and I’ve taken two songs each from the two represented here, otherwise it’s one song per film. 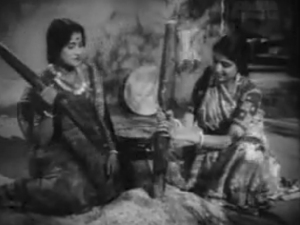 The songs have been chosen on the basis of their involvement in village life. The Singers don’t just appear dressed as villagers running around in the fields, but are an integral part of their background. The songs are not in any order, …except the first one which feels special.

One of Manna Dey’s best songs. Every time I hear and watch the clip it never fails to touch me deeply. Balraj Sahni’s walk across the field of working farmers, the woman telling him Apni kahani chhod ja kucch to nishani chhod ja (leave back your story, leave some memento behind)always brings a lump to my throat. We know how uprooted he’s going to get. It is so effective. Balraj Sahni’s body language adds to it. The plaintive high note at the end of the song gives me goose pimples.
There is a lot going on in the background. Women carrying water pots and walking towards the well, where a woman is already drawing water. The farmers tilling the ground also includes women. One man with another is piling up hay. All in harmony.

The film is based on Munshi Premchand’s short story “Do Bailon Ki Katha”. If anyone’s interested you can read this short story in Hindi here.
A happy song with raised sickles 🙂 jaise taise kat gayi gam ki raat kali (somehow the dark night of sorrow has passed by). The tune is lively yet soft and smooth. Nirupa Roy looks very pretty, ably supported in the song by Balraj Sahni and other farmers.
One can see the whole process of getting the corn following the harvesting of the crop. Cutting, husking (beneath the hooves of bullocks going round and round or by beating the stalks), winnowing. Very interesting.
The bit of trivia provided with this clip says that though the music director of the film is Roshan this particular song was composed by Salil Choudhary (actually from a Bengali film) when he was ill while visiting USSR. Wonder if that has anything to do with the raised sickle 😉 and at about 1:53 it doesn’t sound Indian (must be Russian). 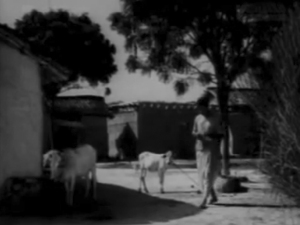 The film is based on Munshi Premchand’s novel of the same name. Hope and despair – Raj Kumar’s happiness in the knowledge of life bursting around him in spring, later turns to despair as months pass by without rain. Mukesh’s voice sounds rich. Love this song. The adaptation brings out the struggle quite well, and Raj Kumar’s expressions are great, of a man not really having things going well in his life.
The village ‘activity’ here is the age old one – hopeful before the rains – scanning the sky for clouds – despair when seeing none. 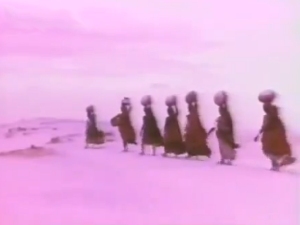 The film Do Boond Paani dealt with the water scarcity faced by the villagers in the deserts of Rajasthan. The long trek to the well, happy at the thought of their ghaagris and the water they will bring back in it.
Note the end of the clip carefully, the ghaagri (pot) hits the dried bottom of the well.
A sadder version of the song showing the long trek back by the sad women without water. Singer: only Parveen Sultana.

I’m sure every village has one, and Amitabh seems certain he’s the one (me too,). He sings quite confidently sara gaanv mujhe rasiya kahe (the whole village calls me Don Juan). If it wasn’t Amitabh singing I would have thought the Singer overestimates himself. What an attitude, such brashness, all turned into something very charming by Amitabh – I have Anu Warrier to vouch for it. 😀
The wonderfully shot scenes with coconut palms, green fields, and of course Amitabh with that lock of hair falling on his forehead, make it so vibrant.
The village activity – collecting coconut ‘ras’ (ras is the name of the Bengali novel it is adapted from), farmer working in the field, stacks of hay in the cart and people going about their business. 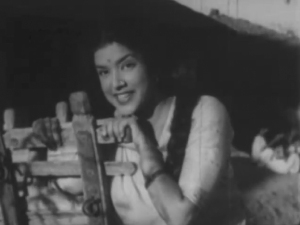 If there’s a rasiya in every village there’s the gaanv ki gori too. Shubha Khote makes a lovely one while waiting for her lover to appear. I chose this song because the village goings on in the background are great.
Women busily carrying food for their husbands in the field, little girls playing hopscotch, don’t miss the ‘shadow’ of the women carrying pots at :15 on their heads, man and woman making hay stacks, but getting distracted midway, kahars (bearers) carrying a doli (palanquin), a village talab (pond), women winnowing the husk from the grain, bullocks crushing ears of corn to get the grain out (or is it cotton), bullocks turning the water wheel to water the fields, the woman slinging stones to keep the birds away, and at one point other girls are picking what looks like cotton (?). In the midst of all this our dear gaanv ki gori is running around sweetly singing this lovely song.

Who doesn’t know of little children running behind anything new/different that might turn up in their village? This is exactly what happens when Waheeda arrives in the cart driven by Raj Kapoor in this village. Love that little boy in a black kurta who runs down from his house to join the rest of the kids. Later one can see him skipping along with them.
The song starts at about 1:29 with beautiful flute music.

At least our Hindi films would have us believe that the people in the villages are not far behind their brethren in the city when it comes to entertainment – village style. Here we see Dilip Kumar, looking ever so cute doing those quaint dance steps while using the moment to tell all about the condition of his manva. The language, the setting, the atmosphere is all so well picturised. It’s a great song (also the film – where everyone spoke brij bhasha except the educated). Beautiful images! 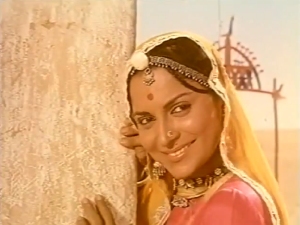 A village in Rajasthan. The cinematography is breathtaking. There’s a marriage in the family (Rakhee’s) and the women are busy about it. The occasion makes Waheeda miss her lover very keenly, and so she sings about it in the guise of wedding revelries. Clever! She looks lovely. The whole atmosphere is so authentic. The film was very good too. Lovely music by Jaidev. 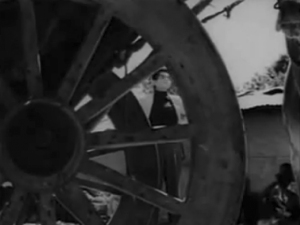 I love this song. A short narration of what has gone before.
It is at a thrilling point in the film. The hero and the heroine have met only for a few seconds in the forest amidst the swirling mist around them, creating mystery. Now, Vyjayanthimala sees Dilip Kumar here at the mela (fair), and recognizes him as the man whose sketches she had stolen, while he stares at her trying to read her expression. They both stare from some distance (quite breathlessly I should say) when someone passes in between them with a rolled up long mat. While he is passing by Vyjayanthimala ducks behind the bullock cart standing there.
The clip starts at this point showing Vyjayanthimala peeping through the space in the cart wheel, while a perplexed Dilip Kumar searches for her. (I’ve copied and pasted this from Dustedoff’s post about ten memorable scenes, where I had mentioned this as a memorable scene).
I love the shot through the wheels of the cart. It is a bustling mela and the camera captures the various goings on very well. Unfortunately during the song we don’t see much of it.
The music has the lovely flowing tune typical of Salil Choudhary, especially like the bit of music while she’s looking at him ducked behind the cart. 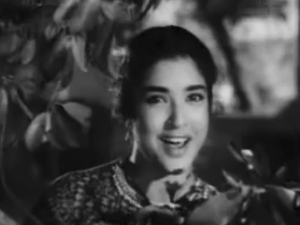 A simple village house with the older womenfolk pounding grain, winnowing, while Shubha Khote runs around singing a very musical composition of Pt. Ravi Shankar which sounds extremely pleasing with a classical bent, and of course the sitar has been used excellently, something I miss in contemporary music. She does pick flowers at one point, J in addition to looking very pretty, and suitable.

I couldn’t end here even though the list has, without a nod to a contemporary village as shown in the film Welcome to Sajjanpur which has more modern activities in addition to harvesting, etc.


I enjoyed the satirical take on a modern village. I like change, but for the better, and not just for the sake of it. Sajjanpur is a village (The character played by Shreyas Talpade says so, in the beginning). The village of Sajjanpur was known as Durjanpur, but when Pt Nehru visited he asked the name to be changed to Sajjanpur. Name changes don’t really bring about a change, but here it did. Pehle yahan sab Sajjan log the jab se naam sajjanpur pada hai, durjan hi durjan [earlier when the name was Durjanpur (village of scoundrels), there were well behaved people living here, but ever since the name changed to Sajjanpur (village of well behaved people) there are only scoundrals here]. LOL!
Democracy has reached villages, and they are more aware of it than ever. In this village it is election time. The song covers different parties canvassing, an explosion – and the result of the election 😀 This village activity is new (as compared to the films of the time mentioned in the list).

Which are you favourite village songs?

← Of Clouds and Separation
Happy Janmasthami →