Last evening I saw Dhobi Ghat at the local cinema hall. In the town I live, hardly any Hindi films are shown. Thus, I was very happy to see the bills of Dhobi Ghat on the cinema display board. I wasn’t expecting much, because the reviews had been mixed. When I entered the cinema hall last night there were five people including my freind and me. The fifth person it seems had just come there to sleep and stink. We sighed and moved one row ahead. The film began, the plot unfolded , the pictures came, it moved, it swept over the streets of Bombay, the sights, the smells (!), the colours, the hectic, the stillness, the monsoon, the music, the life. A poem, a song with a strong ending, but all the same a beautiful ending, very fulfilling! 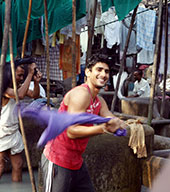 The film is coming together of four stories, four lives. The common person to these three stories is Arun (Aamir Khan), a shy painter, who has just recuperated from the post-depression of a broken marriage. During the opening of an exhibition of his works, he meets Shia (Monica Dogra), a bank clerk based in NY in Bombay on a sabbatical. They end up in bed that night, but the morning after is not so beautiful as the evening that led to it. Unknowing to each other these two persons do have something in common and that is Munna (Prateik), the local Dhobi (washerman).

The disappointment and anger of being rejected boils over makes Shia lose her temper on Munna.
To make amends she befriends him. Seeing that she is a phographer, Munna asks if she would make good photos of him for his portfolio, for his big dream is to be a film star. She agrees on the terms that she is allowed to record his daily life in pictures.

Arun is moving to a new flat in one of the old districts of Bombay. A beautiful old flat with stained glass windows. Here he discovers some video cassettes from the former tenant of the flat by the name Yasmin (Kriti Malhotra). She has arrived in Bombay as a newly wed bride and it seems she had wanted to send these cassettes as a letter for her brother. We as viewers realise soon enough that the camera is her only friend and companion to whom she can trust her innermost feelings and thoughts. 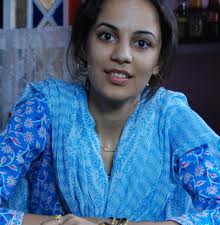 Munna, who is getting so much attention for the first time in life falls in love with Shia. She in turn has still not overcome her feelings for Arun. He is getting involved deeper and deeper with Yasmin, through whose eyes he now sees Bombay and draws inspiration for his art. Four persons separated by different boundaries come together. Munna and Shia separated by class, Shia and Arun separated by temperament, Arun and Yasmin separated by time. They are all having a nice time with each other, but as viewers we know it cannot last for long, but just like the protagonists we prefer not to see the differences and just be in the now.

Great poetic film! I am still flooded by the pictures of the story. Suddenly a scene comes in the mind and unravels a hidden story. While walking through the streets a visual from the film rises before the eyes and explains a link between the stories. A real journey of discovery.

Yves at his blog has also written a review of the film in his unimitable style and picturesque words. He is right in the way that the way the story has been filmed is sort of new for Hindi film industry and has a quasi European stamp to it. I think it is completely harmonious for the narrative and it helps tell a story, which otherwise might have been shred apart by its explosiveness. Moreover Hindi cinema, like any other art medium, has always drawn inspiration from outside and which is/was conducive for its growth and present status. A river on its path to the ocean gains water from many streams and it takes along with it dirt, filth, soil and stones, which fertilises the life on the lower banks.

The part of the film, which shook me was the part when the four threads which wer woven together comes apart. The shocking part is Yasmin’s suicide note, which not only shakes us but also Arun, who after the break up with his wife has suddenly found an undemanding companionship. He falls down and runs away from his flat, but there is nobody who can offer him solace. He sees the old lady downstairs, who sits on her chair and stares in the air, alone and forsaken. Suddenly we realise the whole dimension of her tragic existence and so does Arun. He looks at her, begging for comfort and relief, but there is nothing, except dejection. He breaks down!

Go and watch the film, you will love it!

Posted by harveypam on January 5, 2012 in Bollywood