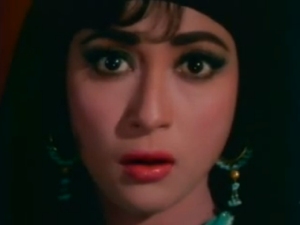 Mala Sinha is an actress, who shaped Hindi film history in the late 50s and 60s with her portrayal of diverse roles, which ranged from a princess to a fisher-woman, from a spy to a blind flower-girl. In my childhood, I saw  her a lot in the Chitrahaar and Chhaaya Geet programmes and also in the Sunday evening film. We children, used to make fun of her quite often, but were also in awe of her all the same. Even now, although she makes me laugh unwittingly at times, I do have a soft corner for her and a big one at that! 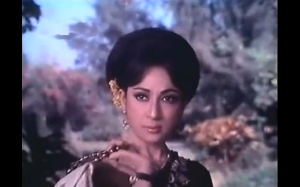 Choosing songs from her films was not easy. That is why put in some rules
a) One song pro film
b) Only solo songs
c) Songs to which she lip syncs, i.e. no background songs 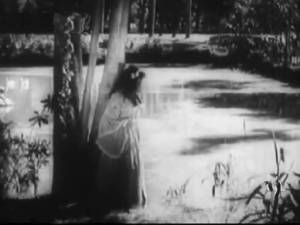 Mala Sinha’s breakthrough Hindi film! She plays Ophelia to Kishore Shahu’s Hamlet. This is the mad scene just before her death. She is very subdued here and no trace of the high melodrama that would escort her acting in the coming years. Wonder how this film fares in comparison to the actual play. Notice how the antara and mukhda sound as if they would belong to different songs and still harmonise. Maybe the music director planned it that way to highlight lunacy of the character.
If you would like to hear and see the composer Ambroise Thomas’ take on the same scene in his opera, here it is! 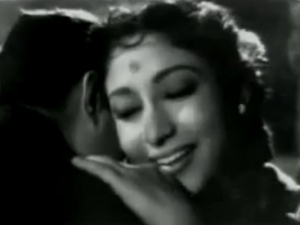 What a swinging song! I wanted to call it racy, because it gives me the feel of speed, but the word racy is used so often in a different context. Shankar-Jaikishan and Lata do evoke the jhoom of the night. It reminds me of the other Shanker-Jaikishan composition from Chori-Chori, aajaa sanam madhur chandani me hum 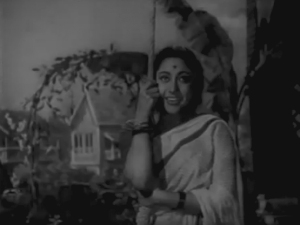 Now this is what I call a sweet song. I think it is a perfect example of the sweetness in Lata’s voice, which nobody could imitate. Mala plays a blind girl. A species, which was abundant on screen in the 50s, 60s and 70s. Such roles became rare in the 80s. Such characters being relegated to smaller roles of hero’s sisters. 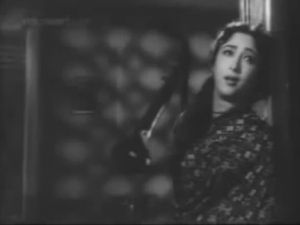 What a prelude! I think I love the flute prelude more than the song if that is possible. The prelude sets not only the mood for the song but also conveys the message.

This ranks in my list of masochistic songs very high, but it is beautiful all the same! And nobody could sing it better than Lata. 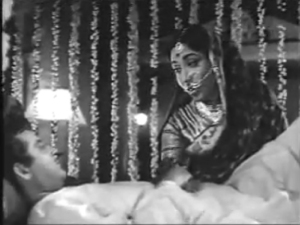 Mala gets to sing a lullaby here. But not for her child, but her child-like husband. She gets married to a rich heir. On the wedding night she discovers that he is a four year old child in a body of a grown-up. So instead of her first night as a wife, she ends up with having a first night as mother! 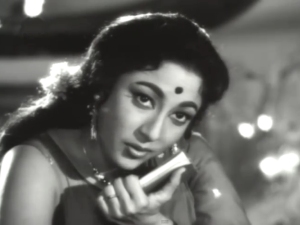 An insomnia song! I won’t say anything more, it will just spoil this sublime song. 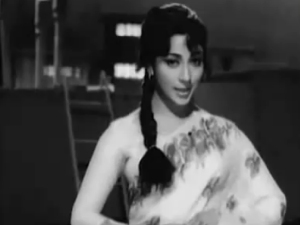 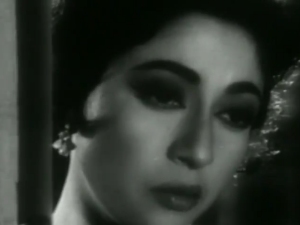 Asha Bhosle at her best, expressing her grief at misunderstood expressions of love or non-love! *sigh*

If till now we had Mala in devi avatar, we find her here as a glamorous spy. In the 60s, where Ravi was engaging mostly Asha Bhosle for his compositions, here is one of his outings with Lata Mangeshkar. One has to admit, the song does have an Asha-like sound to it!

Mala Sinha is one of the few actresses, whom I saw in person. Her daughter went to the same college as I in Bombay. She would visit the college to keep tabs on her daughter. It was the late 80s. 1988 or so. On my way to the college canteen with my friend, I see this graceful lady. She stops us and asks me about the name of a the flower in her hand. I look at her and smile, wondering why she should be asking me, but all the same I tell her. I think nothing about it, because my fellow students would be asking me such things quite often (most probably I was boastful even then ;-). My friend starts laughing, after we move ahead. I ask him what is the matter. He nearly shouts “Didn’t you recognise her?”. I reply in negative and he shouts again “She is Mala Sinha!”

It must be already the 11th of Nov. in India now.
So here is to Mala Sinha! Have a nice birthday, Mala!

Posted by harveypam on November 10, 2011 in Bollywood, Lists