It is so hard to decide if I like this film or not. The story is anti-feminist and traditionalist. But at the same time the director/story-writer’s take on “upper-class liberal reformers who seek to impose their ideology on society at large”, as Philip Lutgendorf  puts it, in the form of Abrar Alvi’s witty dialogues are simply great. It is simply difficult to have a single opinion on this movie. Dustedoff  has also provided a nice review of this movie on her blog. 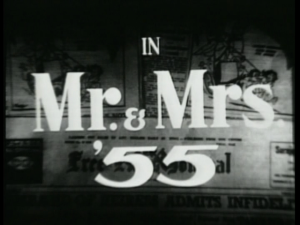 The film begins in fact, if we look at the background of the credits properly, with a flashback.

The opening scene shows a newspaper boy (Jagdeep) shouting out the newspaper headlines of the imminent divorce bill.

Inside a Villa we see Sitadevi (Lalita Pawar) holding a meeting to discuss the divorce bill but her listeners seem to be more interested in debating over the effectiveness of milk cream or orange peel for the skin.

Meanwhile Sitadevi’s only niece Anita has gone off to see a tennis game, against her aunt’s wishes. The reason: her flame the tennis pro Ramesh (Al-Nasir) is playing there.

Trying to runaway from her aunt’s secretary she bumps into Pritam (Guru Dutt). He is dumbfounded by her beauty and can’t get a word out till his friend Johnny meets him. Dil par hua aisa jaadoo…

Anita is a heiress to her father’s millions, who died when she was still small. At the age of 20 she is going to inherit all the money but on the condition that she marries within a month of reading the will. Sitadevi wouldn’t like seeing Anita married off she would rather have her ‘independent’.

Pritam lives off his Casanova-friend Johnny, who is a press photographer and a Christian family gives him boardings and free meals. Though he is a cartoonist by occupation, he is unemployed and this leads him to visit Johnny’s boss (Bir Sakhuja) often. During such a visit he gets a phone call from Sitadevi, who is in search of a suitable, respectable man.

Pritam, who is still unemployed, though shocked when he hears of Sitadevi’s proposal, agrees to get married to Anita, when he realises who she is. 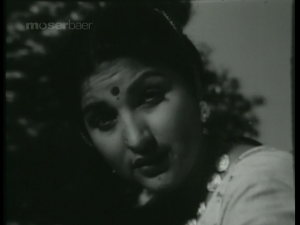 Seeing that Ramesh has no plans to marry her, Anita is heartbroken and meets Pritam unexpectedly while running away from her Nanny. Abhi to ji hone laga kisike nazar…

Anita is also not pleased with a fact that a man is being bought for her to get married. When she discovers that it is Pritam, she is even more disappointed, but all the same gets married to him, because of the inheritance.

Pritam can’t stand the fact, that Anita is angry with him. A complete macho that he is, kidnaps her and takes her to his brother’s place in the countryside. Chal diye bandha nawaz… 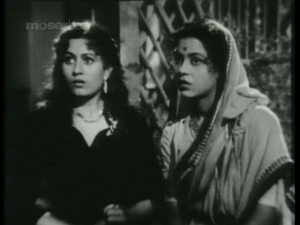 Pritam’s sister-in-law (Kumkum) gives her a basic course on duties of ‘Hindustani’ woman and wife. That would include even getting beaten up by your husband, cause he makes love to your afterwards with ‘tan aur man’ (body and mind)! Deeply impressed by this philosophy (and I think her eagerness to get married as soon as possible) and Pritam’s soulful singing in Mohd.Rafi’s voice (Udhar tum hansi ho…), she says YES!

As far as I am concerned this could have been the end of the story, but we have already seen in the headlines of the newspaper that further drama awaits us. Anita (clever girl!) had already telegraphed her aunt about her kidnapping and given her, her whereabouts. Well, she didn’t know that she would be swept off her feet by Pritam’s singing and Bhabhi’s lessons. Anyway, Sitadevi and her secretary come to her rescue, which she doesn’t need anymore. Pritam, the ram avatar he his, suspects her of being not true to him and raises his voice and accuses her of all things possible. Well, effects of soulful singing have also their expiry date and I think, the more the accusations, faster it wears off. Off she goes with her aunt.

Pritam goes now into a Devdas mode and to facilitate the divorce proceedings, which Sitadevi demands, he even poses for a photo with a whisky (Ballantine?) bottle and two girls on his lap, which he delivers to Sitadevi. Seeing this as proof of Pritam’s infidelity even Anita agrees to the divorce. Meri duniya loot rahi thi… .

This song gives one a feeling as if one has already jumped to Guru Dutt’s next film ‘Pyaasa’. 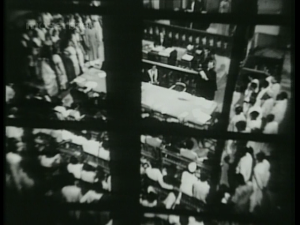 As far as I know, by mutual agreement the divorce case doesn’t go to the court. But that would deprive us of Pritam’s masochism, Tun Tun’s comic scene and the camera angle above.

I know you are biting your finger nails off, eager to know if Pritam and Anita will ever come together and if yes, how? What is Johnny Walker doing in all this? Will Sitadevi get an assembly seat or become a MP or still better a Ramdev? All these questions will be answered when you watch ……………… MR. & MRS. 55!!!!!!!!!!!!!!!

What I liked about the movie?

The fantastic photography by V. K. Murthy, see for e.g.: Thandi hawa khali ghata. Madhubala. She gives credibility to this otherwise naïve role. O. P. Nayyar brilliant songs and music. Johnny Walker and Yasmin in the csp. They keep you going through the hard parts and depressive mood of later Pritam.

Nanny: Hamar zamane me prem karte the khana khake, bhukhe pet nahin. (In our times we used to love with a full stomach and not hungry)

Sitadevi: Tum communist ho? (Are you a communist?)

Pritam: Yahan to do roz bhukhe rehke bhi roti nahin milti (I can’t even get a bread slice at times)

Anita (in Marie Antoniette mode): Roti nahin milti? To cake biscuit kyu nahin khate? (No bread? Then why don’t you eat a cake or a biscuit?)

Sitadevi: Woh tumhari chahiti biwi nahin hai. (She is not your beloved wife?)

Pritam: Woh meri biwi nahin hai, to talak kyu mangti hai? (If she is not my wife, why is  she filing for a divorce?)

The whole business of Hindustani aurat and her duties.

Bhabhi: Tan man se pyaar bhi to wohi karte hai! (But he loves me with body and mind as well)

And since women talk about their roles, the writer gives his views a female credibility. Moreover the women’s rights activist Sitadevi has been given an extreme position. By doing that no sensible dialogue about gender roles is possible. And by letting her admit, that she has learned about these views from women of America and Europe, they clearly demarcate her as being an alien. A Hindustani woman would never do such thing.

Pritam: Again one of Guru Dutt’s passive, self-pitying male lead characters. The only action on his side is to debase himself by making that incriminating picture. He is selfish and egoist. Not really a sympathetic guy. 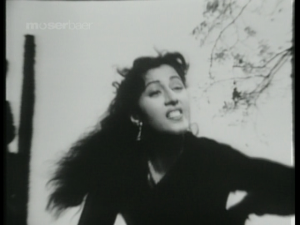 Anita: A naïve girl of 20 years, but behaving for the most time as if a child. She shows all the same more verve than Pritam. She jumps off balconies, sends off rescue telegrams, goes off in search of her lover!

Sitadevi: Did the writer give her this name on purpose to show that the women of India are no more Sitas of Ramayana? A very two-dimensional character. Thank God, Lalita Pawar got this role. If anybody else had tried it, it would have become just laughable.

The Hindu Marriage Act  was passed in 1955. This Bill provided for Hindu marriage divorce. In Hinduism as such marriage is seen as a bond for the whole life and thus divorce didn’t have a place in it. This is at least, what is propagated by the traditionalist. But in the Dharmashastras even Manu allows for marriage termination.

Kautilya in his Arthashastra even takes for granted the woman with several husbands (Wendy Doniger  p. 327; which is by the way a wonderful book about the Hindu theology and mythology but not much on spiritualism. I had a great time reading it.)

One can imagine the in the years before passing of the Hindu marriage Act, people were discussing it a lot. And this movie is Guru Dutt’s answer to it. Not quite feminist, not even humanist.

Can anybody please check if I have recognised the following actors and actresses correctly: 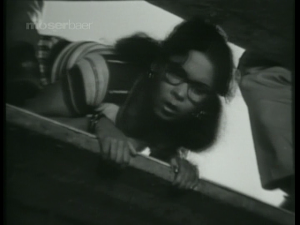 And does anybody know which characters were played by Agha and Haroon? I don’t know the Haroon but the Agha we know was not to be sen anywhere.

If it is an exact remake, no thank you! But it would be great if a woman director takes up the topic and gives it a feminist turn and make a gender communication in Indian urban context possible.

Any suggestions as to plot twists?