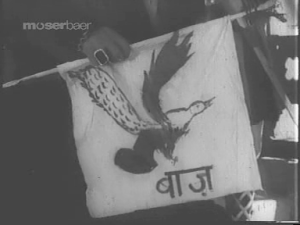 I was looking forward to this movie for lots of reasons. It is Guru Dutt’s first movie as a full-fledged actor. Geeta Bali. Having read the review on Upperstall by The Third Man, I thought Guru Dutt and a swashbuckler movie combo had to bring forward a super hybrid danshoo film. Furthermore, although the film has a patriotic theme, I can’t recollect that the movie was ever screened on DD.

The cover showed Guru Dutt in a pirate costume, therefore I was expecting him to do an Errol Flynn. Imagine my surprise, when I discover mid-movie that Geeta Bali has not only the title role but is also allowed to rescue the hero twice, beat him in sword-fight and many more for women unheard things in Hindi movies and Guru Dutt. Wow! 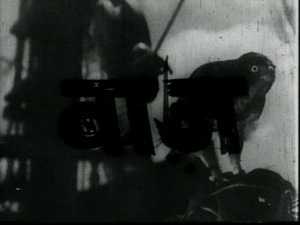 As the credit rolls in the beginning we see a very much starved, bony hawk. My heart overflows with pity at its fate! I send up a prayer and hope that this poor bird won’t be tortured more than that. 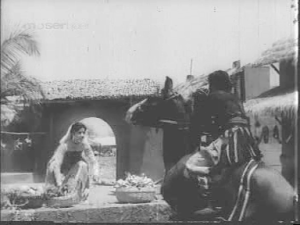 The film opens with a scene based in a Malabar village, where the Portuguese soldiers are harassing the populace (what else?). The villagers are no cowards themselves and defend themselves with gajar–mooli–tarkari (vegetables). Alas, a lone damsel, Nisha (Geeta Bali) is left fending for herself, when all others run away. Ha, but there comes the knight (Guru Dutt without the shining armour), 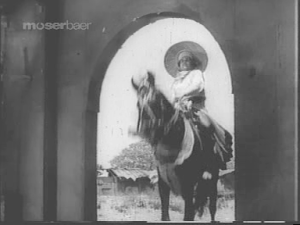 who declares that he is a dacoit and rides away with her and sings a duet.

One also hears that a Ramzan Ali is being searched for treason, because he was selling goods to the Zamorin and anybody giving him shelter would be prosecuted. 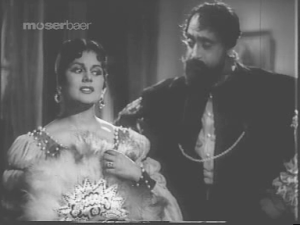 The next scene takes us to the General Barbossa’s (K.N. Singh) palace, who when speaks Hindi with a good sprinkling of Portuguese, and is plotting to take over the throne with the help of Rosita (Kuldip Kaur).

The good ol’ dacoit is but none other than the prince of the kingdom and he has a cousin (Ram Singh), who is quite chummy with him. 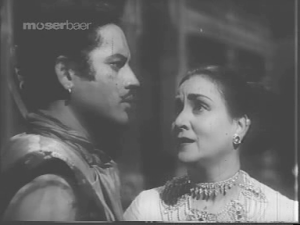 And like every good hero, he has maa (Sulochana Devi – Ruby Myers) , who warns him, that his cousin is trying to usurp his throne. General Barbossa wants to send the prince, before his coronation to Portugal, stating that it is a tradition, which the old king also followed.

Meanwhile Ramzan Ali, who is a good friend of Nisha’s father, is hiding at their place. Hindu-Muslim bhai-bhai! Both get arrested and are brought before the general. After delivering the mandatory dialogue of patriotism, they are sentenced to death.

Nisha goes to rescue her father but is captured and the whole family end as slaves in a pirate ship. 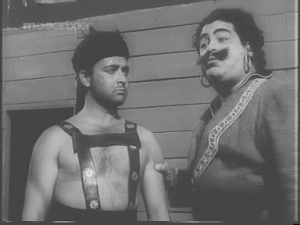 On board is also a hunk of a sailor (who is he? He looks like Lucky Ali. Maybe Mehmood’s elder brother?) and I don’t mean the one with the bushy moustache . The pirate drowns all weak slaves, which includes Nisha’s father and Ramzan Ali.

The prince is meanwhile on the ship to Portugal accompanied by Rosita, who is adept at playing the harp with her toes, who tries to teach him the customs of Portugal, something like in My Fair Lady. Well, the prince is no Eliza and nor Rosita Prof. Higgins and this ends with disastrous results not only for Rosita but also for our ears!

Meanwhile on the ship, Nisha sings a patriotic song to rouse the slaves to mutiny, with a resounding success! But the freedom doesn’t seem to have a good effect on them. The next scene finds them rolling on the floor all full of the good stuff. But good ol’ Nisha can not only sing patriotic songs, she can also give rousing speeches. 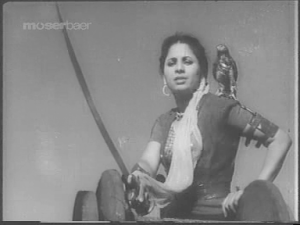 The sailors are all so impressed by her speech, that they declare her their captain. A hawk lands on her shoulder and she is declared as Baaz (the hawk), but they themselves call her didi (sister).

When two main characters of the story are on the sea in two different ships, they have to meet somewhere. And how! Nisha’s group captures the rival ship, take the prince a prisoner!

Power and success bring with them responsibilities. Nisha’s own father, who had been drowned by her enemies, is forced to give the orders to drown the prisoners, except the prince, the astrologer, Rosita and an emissary, who is sent to warn Barbossa. The latter can only bring the message that the ship has been taken over by mutineers and dies.

Well, as far as I am concerned this could have been the end of the film. Nisha and the prince , who now calls himself Ravi, could have lived happily ever after on the ship. But there is one CD still left. Will Nisha and the prince come together? What will become of the kingdom? Will Barbossa’s evil reign end? Will the hawk get better plumage?

It is not a bad film. In fact it is very much of a feminist movie (even when you compare to the treatment of female roles in present Hindi movies) for Guru Dutt. But it lacks the depth of later Guru Dutt movies. There is not much character development, thus it doesn’t make much sense to discuss them here. Geeta Bali gets a little bit shrill when she shouts, but acts convincingly. She is supported well, by all the actors. Kuldip Kaur’s role is reduced to a caricature; she does everything to save it from its fate. Guru Dutt grins his way through the role. His role doesn’t have many emotions to show except grin and look shocked! K. N. Singh is best at his raising the right eyebrow thing.

Based on the claims by Barbossa, that Portuguese helped Ravi’s ancestor’s free themselves from the Zamorins, the story must be based sometime in the late 16th century or early 17th century.

What I liked about the movie:
Geeta Bali! She brings a glow, a presence to the role, though I missed her chulbulapan here. The strong female roles were a good change! The moment, where Nisha has to decide between her feelings and realpolitik, makes the movie humane. V. K. Murthy’s photography. The scene where Nisha has to decide the fate of her prisoners is well shot, the protagonists move from one window to the other and reach the common frame when they come to a decision. Or the last shot, where Murthy gives the huge arch the shape of a keyhole! Wonderful!

What I didn’t like about the movie:
The pace! What the movie needed was, is a good editor. The music by O. P. Nayyar could have been better. The two songs, “Ae dil-e-deewane!” “Mujhe dekho, hasrat ki tasveer hoon mein” are quite nice. The very special special-effects. But one can overlook it! The dialogues on the roles of man and woman and Hindustani women and Portugali women and so on and so forth! *yawn*

All in all a time pass movie! But don’t expect the usual Guru Dutt’s finesse!

Posted by harveypam on April 30, 2010 in Bollywood, Guru Dutt Series